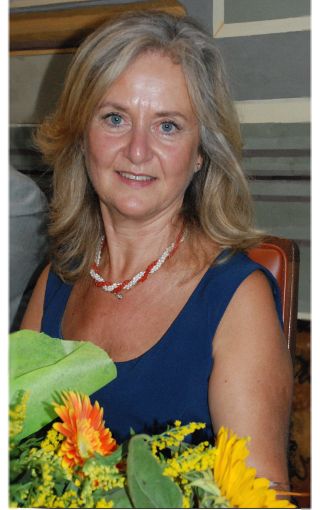 Horse on art field was represented over the centuries not only as an essential accessory (especially as a mount of kings and knights), but as a character itself in order to describe mythological and fanciful scenes. Horse was also used by many artists for playing imagination allegories: let us thing about the sun horses, to Pegasus, the Unicorn just to remember just with mind's eyes a lot of familiar scenes.

But there are artists that use the horse subject for interpreting it even with a three-dimensional technique unique in its kind, just like the painter Mariella Sciascera does, using exclusively, even if big dimension paintings are involved, tiny paintbrushes with some millimetre point, or using it for representing a road made with images of fancy and dream that really give evidence to the creation of something that is more real than the reality itself and sometimes let appear what is deeply buried in the unconscious. As it happens in some oil paintings realised after a dream of Mirò.

Nevertheless there are artists that use the horse matter also to "interpreter" or to "utilize" it as a dream or even nightmare performance.

It is a sort of hidden affinity in every man or obviously woman artist which find more easily to paint or to carve a rebel horse instead of another animal, and that is why Mariella Sciascera claims entirely this class of artists. Born in Rome, young mother of two sons, Mariella Sciascera followed every similar to many artists paint. Although she loved art studies and would had like to follow the Academy artistic, she had to approach other banks but the passion, flair and her will can not be bent by any opposite strength, and this is the case, sometimes takes more determination in order to realize her goal. Hitherward was for Mariella that after her first exhibition in 1984 in Pavona (a little town near Rome where she lives), did other great care exhibitions, mainly those related to the years 1990-1991-1992 in Spoleto (Umbria) during the famous Italian "Festival dei due Mondi" . Remarkable was the exhibition on March 1995 at the "Thelesma Gallery " in Rome sponsored by the U.N.I.R.E. (Italian National Organisation for the increase of the horses breed). The roman artist, is not just for case, an admirer of the great Italian painter "Caravaggio" and like him she is very much afraid of the ugly, looking always for the truth just like it is. Moreover as she is very religious she tries to make her works more real and tangible. The light that pervades her paintings is almost dazzling and remarks the painted scene without compromises. There is so much grace and beauty on the painted images that we can very well understand as the thought of Mariella Sciascera runs to the picture. As it happens on the big portrait (oil painting) of Professor Rita Levi Montalcini (Nobel Prize) which is now shows in the Presidential hall of the CNR (Centre of Research of Rome). In this context we can also describe and present shortly her horses paintings.

On the occasion of the 150th Anniversary of Pastrengo Cavalry charge, the painter Mariella Sciascera made an oil painting of big dimension showing yesterday and today charge.

In the work is remarked the horses over helming strength and the Carabinieri bending forward with their unsheathed swords. Looking at the painting it seems to hear the loud noise of the trumpets and the roar of horses surrounded by dust.

Why the horse than? Why this choice? First of all she firmly says because in this animal is living an internal deep strength that spontaneously leads o thought, yet to a freedom desire. This is underlined by the two horses that with impetuousness on jumping break their chains.

We may call her one day "Mariella of Horses". Mariella Sciascera after a s series of various performances, in spite of she has a lot more to say on art expression, is hit there to increasing horse passion which is strictly tied up with her childhood as consequence of it she is very found on horses paintings. Mariella Horses are very often realistic ones that is alive, and it is not just a pure and simple figurativism (this would be anyhow acceptable) but respect the need to "visualize" as well to "show" a horse as it is and not just like our fancy reports.

Even when the artist is following a dream, and this is very well shown in the happy "Baccus" as well in other mythological figures, it is always an open eyes dream: where the animal or person object frames have their precise physiognomy communicating feelings, desires or renunciations.

Let us take an example the painting showing one gray and one brown horses it is easy to image on them human intentions and thoughts: a man (the grey) and the woman (the brown one) that separate themselves and to go far; to make triumphantly because of the archived freedom, and the sad and abandoned female with the swinging tail.

It is of great and symbolical significance, the oil painting entitled "knowledge, man and the infinite" where to see a young archer that is throwing an arrow standing on of a running horse.

And this is not a forced interpretation, it is always well known that symbolism permeated and form of art. Recently Mariella Sciascera is distinguishing for another feature, as horses portraitist who owns a horse does not have at least photo of it? But how nice it is to have a painting just like the renaissance noble people due to the many artists that now days we admire most).

The Roman painter is dedicating at this kind of performance, that is not very well know but is going to have great success in the next future.

Photos of works are the exclusive property of Mariella Sciascera